Moving From California To Arizona 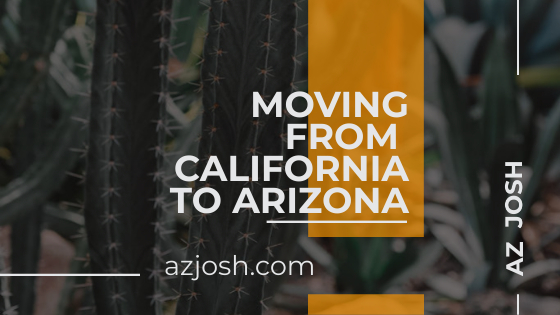 More and more Californians each year are deciding to pick up and move to the Grand Canyon State.

One of the interesting statistics says that the largest number of Californians who moved to Arizona were aged between 18 and 25.

So why do Californians love Arizona so much?

Arizona's Unemployment Rate was 8.0% compared to 9.3% in California

Let's cover some of these benefits in greater detail.

1. Cost Of Living
The average monthly income of $4,757 for Arizona which is similar to the average monthly income of $5,196 for California. However, California is much more expensive than Arizona. Arizona's cost of living is 29.3% lower than California's. The cost of living difference is highest in rent and groceries followed by clothing and transportation. The cost of living in Phoenix, Arizona, is also low compared to Los Angeles, California. So if you are thinking of moving to Phoenix versus LA and cost is a major factor then it's no doubt cheaper to live in Phoenix.

2. Taxes $$$
Residents of California have to pay an extra 9.3% income tax, Arizona residents have an income tax rate of only 4.54% for an individual, and there is no state property tax to worry about ($1,043 vs $1,449). Besides the vastly different tax rates in these two states, citizens can benefit from their sale and property taxes being lower in Arizona as well.

3. Median Home Price
A study conducted by The CoreLogic Case-Shiller index found that during the month of December the median home price in Los Angeles, California was $670,200 while the median home value in Phoenix, Arizona was $279,650. This is a significant difference when considering the cost of living in each city. If you are planning on buying a home, it will cost on average $2,145 USD to buy a square meter of an apartment in Phoenix compared to over $7,000 in LA.

4. Diverse Landscapes and Outdoor Activities
When you think of Arizona, the first things that might come to mind are the Sonoran Desert, Grand Canyon, or Cactus.


Butt Arizona has lakes, meadows, and fields that make it a nature's paradise. The rich beauty and diversity of the state permeates you when you first see it from the sky or when a horse rider at the base of Piestewa Peak rises over the El Camino del Diablo and looks over the horizon to see more than a hundred miles without obstruction before the drop down into the Phoenix valley.

And that's what makes Arizona perfect for outdoor activities with good weather, like playing golf, horseback riding, rafting, hiking and of course skiing in the mountains! (YES, Arizona has mountains and snow).

The dry air and sunlight makes Phoenix the best place for people from colder places. So when you think about Arizona, why not think about trying something new?

6. Good Education
Public classrooms of Arizona have the largest number of students - more than 1 million. At the same time, parental involvement in schools is on the small side. Parents spend here the least amount of money on their school- kids as well - about $7,200. There are many regular schools, but you can send your son or daughter to prestigious magnet and charter schools. Higher education is represented by 85 colleges and universities in Arizona. The quality of higher education is ever high. It is confirmed by the fact that Arizona took the 2nd place in the test scores on the ACT college entrance exam and number of bachelor’s degrees in natural sciences and engineering.

7. Yummy Food
Arizona is known for its diverse food quality and cultural taste. Most individuals regularly consume at least one main street food, but Arizonans are huge fans of their own regional dishes. This includes burritos, chimichangas, margaritas, tacos, and Sonoran hot dogs. The average person in Arizona might consume a Rattlesnake Margarita at some point in their life. Will you?

8. Traffic and Parking
The cities in California have a severe problem, that is, long traffic. Why not shift your life to a place where the traffic is short and less congested? Phoenix has both minimal traffic problems and a central location on the map! Plans to move are perfect for any Californian looking to settle down in Arizona. Phoenix is the state's capital and at one hour, driving to Phoenix's downtown area is feasible from all distances in the city. Phoenix also has plentiful parking lots - one more perk that is lovely and delightful.
9. Thriving Art Scene
You'll be impressed by the diverse art-and-culture environment in Arizona. From art events to cultural centers, Arizona has had great success with developing its art scene. There are many annual events happening around the state as well as organizations, groups, and centers that encourage this development. Phoenix has one of the nation's highest per capita rates of active arts professionals, and also one of the most renowned places to visit because of the abundance of artists and art galleries.


So if you are thinking of making from the move from California to Arizona and are wondering what are the best areas to live? Give us a call today and speak to one our local real estate experts who will be happy to assist you.
CONTACT
JOSH MEACHAM, REALTOR |
WEST USA REALTY